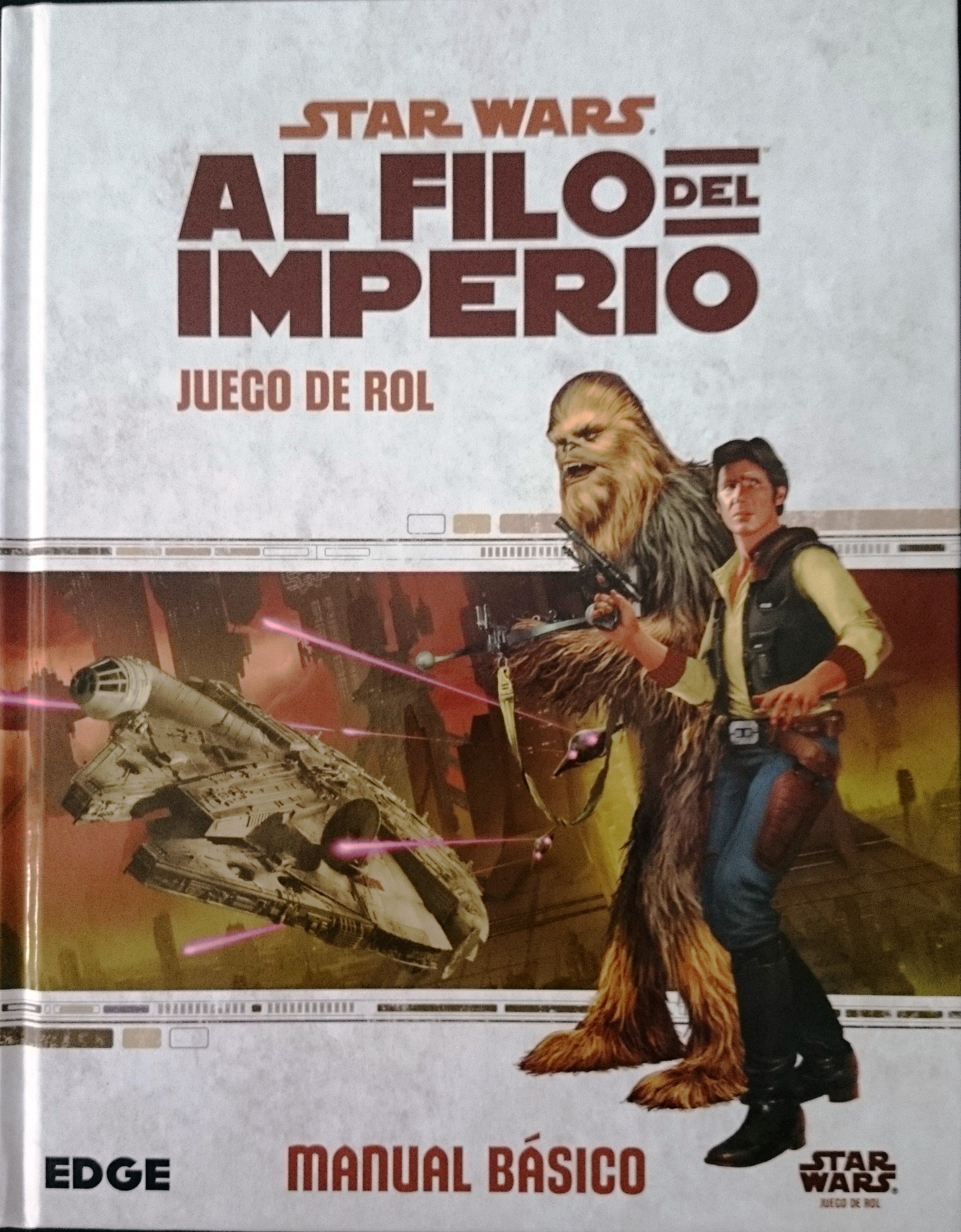 I’m starting a series of posts centered in everything Star Wars which will last until the premiere of The Force Awakens. As first article, a character creation example for Edge of the Empire, from publisher Fantasy Flight Games, designed by  Jay Little, Sam Stewart, Andrew Fischer and Tim Flanders.

The game uses special die. Creation is point-based, being able to obtain more points getting a bigger Obligation (like owing more money to a Hutt).

I’ll try something original. For example, a character based on Han Solo: a smuggler with what is hard to say if it’s good or bad luck.

I have already set my concept. The background has no mechanic effect. From those suggested, I think he comes from a medium class environment, which he left because it was too boring.

The magnitude of the Obligation depends on the number of players. I go ahead with the assumption of creating this character for a four player game, so my Obligation has an initial value of 10. I can make it bigger in exchange of extra Experience and/or Credits. Right now I’ll leave as it is.

There are eight different species in Edge of the Empire: Bothan, Droid, Gand, Human, Rodian, Trandoshan, Twi’lek and Wookie. I’m going to be a Rodian. This gives me the following abilities: Brawn 2, Agility 3, Intellect 2, Cunning 2, Willpower 1, Presence 2. My Wound Threshold is 10+Brawn. My Strain Threshold is 10+Willpower. My Starting Experience is 100. Also, I start with 1 rank in Survival, and 1 rank in the Expert Tracker talent.

The character’s career will never change once chosen. Options in Edge of the Empire are: Bounty Hunter, Colonist, Explorer, Hired Gun, Smuggler, and Technician.

I know I want to be a Smuggler. This gives me the following core skills: Coordination, Deception, Knowledge (Underworld), Perception, Piloting (Space), Skulduggery, Streetwise, and Vigilance. I automatically have 1 rank in four of these skills, and all of them will be cheaper for me to improve. I choose having 1 rank in Piloting (Space), Deception, Knowledge (Underworld), and Vigilance.

Each career has several specializations. You start with one, but can buy access to more later. As a smuggler, I can be a Pilot, a Scoundrel or a Thief.

I go straight to Scoundrel. This gives me the following additional career skills: Charm, Cool, Deception, and Ranged (Light). I can give 1 rank to two of these skills, and  choose Ranged (Light) and Charm.

These are my choices:

Just some values we have to calculate now:

The motivation is what drives the character forward. I’m just going to roll randomly to get mine.

My motivation is Relationship with Former Nemesis. Things are patched between us, but there is still a certain rivalry.

I have 500 credits to buy my initial gear. I could get more getting a bigger Obligation, but I have already done that to get more XP.

Finally, the player’s group select together a ship. There is the YT-1300 Light Corellian Freighter, so that’s my choice.