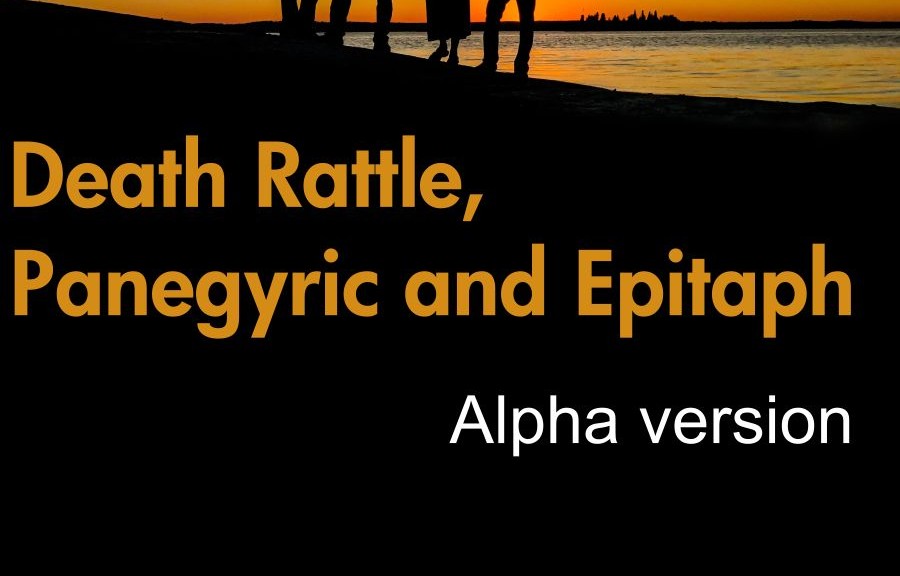 I’ll start with the name. I’ve had the Spanish sentence “Estertor, panegírico y epitafio” (that is Death Rattle, panegyric and epitaph in Spanish) in my mind at least two years. I sincerely can’t remember where did I heard it, or when did I put those words together.

I was initially planning on using it as a title for a mystery novel involving three whodunits with the narrative frame of a conversation between three persons related with the stories and with only the given names of Estertor, Panegírico and Epitafio to keep in secret who they were in each story. I have not totally forsaken this idea, and the first of the whodunits is progressing (it will be called John Merridew is dead), but probably the details and the frame narrative will be different.

So, at the start of 2015 a new entry of the Rolero de Hierro (Iron Roleplayer) contest started. Rolero de Hierro is a mini rpg creation contest with a previously established theme and elements. In that occasion, the theme was death. I had the perfect title for a roleplaying game about death!

There were three categories of elements, with three options each. Each contestant had to pick at least one element from each category, and I chose the following elements:

I had the title and these elements. I decided the game would be about a recently deceased ghost looking for help from his or her living acquaintances. Any player would be able to act as the ghost in any moment (to fulfill the first element), and the ghost would grant narrative powers to the players to allow them to defy the DM (and fulfill the second element). To tie it all together, two additional ideas: there will be three characteristics, called as the game: Death Rattle, Panegyric, Epitaph; and the player characters and the ghost will be going through the five stages of grief: Denial, Anger, Bargaining, Depression, Acceptance.